Nursery World Article: How this nursery group values its apprentices

We recently spoke with Nursery World about the benefits of our apprenticeship roles, discover what makes the Fennies apprenticeship programme stand out.

Work for a nursery group that supports and rewards its apprentices.

A well-structured apprenticeship package with a host of benefits is attracting young people keen to learn and earn to nursery group Fennies.

What makes the Fennies scheme stand out? Its apprentices praise the exceptional support they get from nursery staff and head office management while progressing through Level 2 and 3 and becoming Early Years Educator-qualified.

Training providers Hawk and Lifetime make monthly visits to Fennies, setting coursework, written and practical, in the core syllabus relating to the Early Years Foundation Stage (EYFS), as well as GCSEs in Maths, English and ICT (Information and Communications Technology) where needed. Many Fennies apprentices start at the tender age of 16, so relish the opportunity to continue learning with a vocational aim.

Kai is 22 and has been working for Fennies for nearly three years. She is based at the Beckenham nursery and has reached Level 3. She says she had ‘lots of support’ to get her through the training, and Fennies put cover staff in place so she could go off into the staff room and work with her tutor.

Lily, 20, has been at Fennies for three years and works at the Purley nursery. She says her colleagues were on hand not just to give encouragement and help, but also pep talks if needed!

Kirstie Davies is Talent Acquisition Manager at Fennies’ head office in Epsom, at the epicentre of its network of 11 nurseries, spreading out from south London to Woking in the south-west and Oxted in the south-east. She points out that Fennies is expanding at an average rate of one new nursery every three years, so attracting committed and enthusiastic young people, and keeping them, is really important.

What attracts young recruits to take on an apprenticeship with Fennies? There are a range of benefits, including competitive salary, travel and childcare discounts, NUS card and pension provision. All training is, of course, paid for by the company.

But it’s much more than that. Lily says that she applied for various nursery jobs, but was attracted by the warm welcome and friendly atmosphere at Fennies. She says the interview was less formal than elsewhere, and she was introduced to the other staff who showed her round the whole nursery.

Martin agrees. He works at St Augustine’s nursery in south Croydon, and has been working for Fennies for two and a half years, since the age of 18. He says he was drawn to the group for many reasons, beginning with its guiding principle, which is ‘The Right Start for Under 5s’. He cites the structured apprenticeship scheme as a factor in his decision to join, and he’s never looked back. He loves the ‘family vibe’ and says Fennies is like a ‘huge massive family’.

That sense of company-wide connection is something all the apprentices refer to. Nursery staff visit each other’s nurseries and receive monthly visits from head office. They also have a staff app which keeps them connected. On it they share photos, news about staff promotions and new nurseries, shoutouts, and announcements about fundraising events. The app is interactive, and staff are encouraged to make comments and suggestions. It’s a great way to network, says Kirstie. 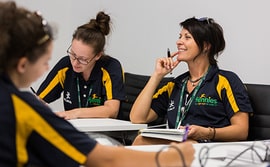 Martin enthuses about the pleasure of outings with the children. He is proud to be contributing to developing a child’s vital life skills, from potty training through to speech and writing, from socialisation to drawing and numeracy. For Lily, highlights include seeing a baby’s first steps or hearing their first words.

Parents are kept firmly in the loop about their child’s progress via the Tapestry Online Learning Journal. Kai thinks it is a wonderful tool, and it puts her ICT qualifications to good use as there are two iPads per room at her nursery so that practitioners can upload photos and videos of their key children for parents to watch.

Kirstie says Fennies’ aim is simple – to create ‘really fantastic practitioners’. Apprentices are set clear and achievable goals: ‘This is what we expect from you, this is what you can expect from us,’ as she puts it.

Once apprentices have gained Level 3, they go from nursery assistant to nursery nurse, and can apply for deputy room leader and room leader roles, which carry more responsibility.

Meanwhile, Kai is now enjoying a stint as acting room leader to cover a colleague’s maternity leave, and hopes to take that role permanently at some point in the future.

Are you looking for a career in Early Years Education and Childcare. Our bespoke Apprenticeship programme offers a competitive salary and an attractive benefits package, allowing you to earn whilst you study.
Careers

Interested in taking a look around one of our fabulous nurseries? We take appointments for visits every week day or you are welcome to pop along to one of our Open Days.
Events